This is a bit massive so TLDR: cycled from Amritsar to Chandigarh, the route taking over 250km, and had some crazy encounters with: a rabid dog, a Sikh pilgrim, police, a welder, and a national newspaper. Enjoy!
My last blog ended as I hunkered down for a night train from Delhi to Amritsar. I arrived and so did the bike. The railway porters in Amritsar laughed when I let out a little yelp in relief, as I caught sight of my bike being successfully unloaded. With the exception of the pannier rack, whose steel frame had snapped in two places, the bike was completely unscathed, and my relief was palpable. The train journey had been rather rough – making me question the reckless decision not to take a sleeping bag or many warm clothes to a part of India whose temperature drops to within a couple of degrees of zero.
Amritsar proved to be a wonderful place to kickstart my journey through the Punjab. Meeting up with a new friend of mine, Uttam, his motorbike led me north of the city, to his family’s beautiful but modest farmhouse. Unlike the oblivious, or disdainful, cows milling around the front yard, the family welcomed me with welcome arms. The laughter of the children and the games we played made the long train trip quickly fade from memory, and after a quick meal of chapati and dal (something I would have to get used to – but absolutely no complaints about that), Uttam and I cruised back in to Amritsar. Showing me the wonderful Golden Temple, Uttam chatted easily about life in Punjab, growing up in a conservative society and his rebellious streak that led him to Canada and back. I had lucked out by finding this guy – knowledgeable about bikes as well as his city, he made the first few days truly memorable. 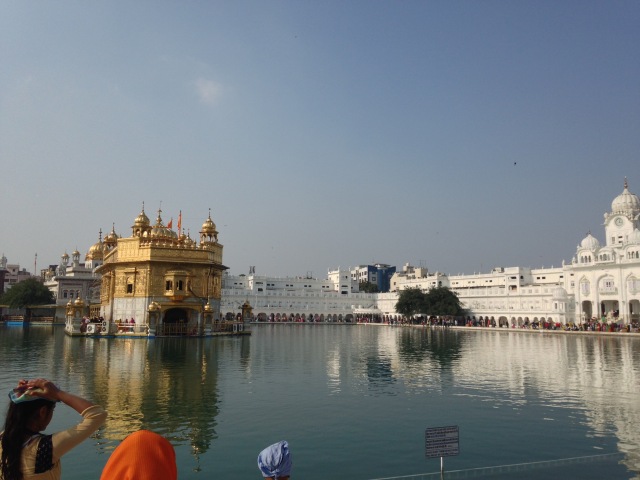 Visiting the Jallianwala Bagh massacre site (where in 1919 the British Colonel Dyer ordered the murder of hundreds of innocent citizens who had beeen milling around in a beautiful park just next to the Golden Temple), it pained me to see the site, and to understand my country’s complicity in such an atrocity, but what alarmed me most was how little I, a history student for 3 years, previously knew about it. Until then, it had merely been a political turning point, a dot on a timeline, context for Indian independence. Seeing the park, its buildings still scarred by the bullets of the event, standing at the raised platform where the British set up theirs guns, and walking down the narrow alleyway which had been blockaded to prevent escape, I felt a sadness that days later still lingers. Uttam knew it had knocked me back (he had warned me it would) and we wandered slowly across town to check out Hinduism’s answer to the Sikh Golden Temple, which we took in quietly. Reviving slightly, we settled into a typical Indian tavern for some tandoori chicken and Punjabi beer (always Extra Strong!) and planned for tomorrow. I had wanted to see the Wagah border ceremony (google it – monty python but laced with the disconcerting backdrop of re-escalating geopolitical tensions between India and Pakistan), but my plan to cycle to Jalandhar the following day meant giving it a miss. Heading home for yet more authentic Punjabi food (and making the huge blunder of misidentifying rice pudding as curd and so plonking some dal in it), I went to bed very content with my first day ‘on the Grand Trunk Road’, excited to give my bike a spin the following day. 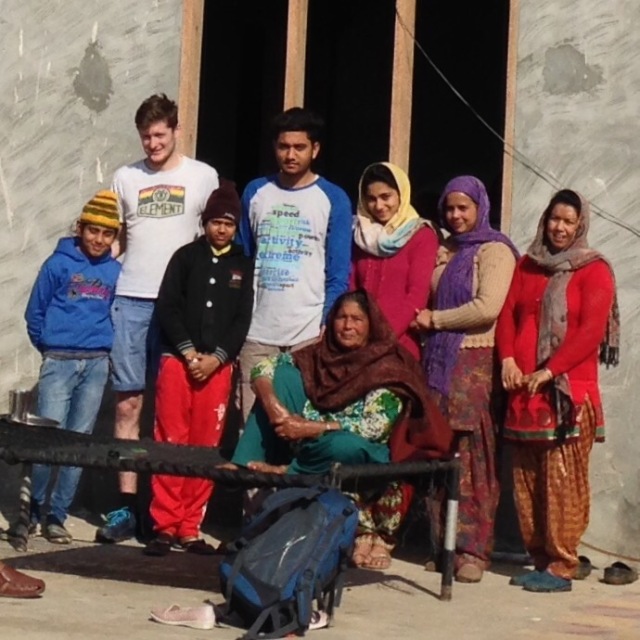 Awaking tomorrow to a disconcerting growl in my stomach, the invitation to join the game of cricket was not met with the immediate affirmation it might normally. However, the infectious chatter of the children as they wheeled away in the yard in anticipation for a re-run of India v England soon caught hold and so ensued an hour of some of the trickiest leg spin I have ever faced (my only shot to make the highlight reel was a clip off the pads literally into cow corner!) With a change of heart, I decided to stay put for another day. My next stop, Jalandhar, could wait. Cycling south, with Uttam on the motorbike, we covered about 40km to his parents’ home in a rural village just south of Taram Tarn. Along the way, we pulled up to a fellow cyclist, a Sikh pilgrim called Kikir Singh. He spoke no English but Uttam explained that he was completing a 7 day pilgrimage north to a temple, and that he would happily ride with us. Not wishing to lose face to a 70 year old on a battered old bike, I upped the pace. To my amazement, Kikar followed me pedal for pedal, smiling at me all the way. It was only later that Uttam explained how much effort Kikar had put in to stay level that I felt some semblance of my ego return. 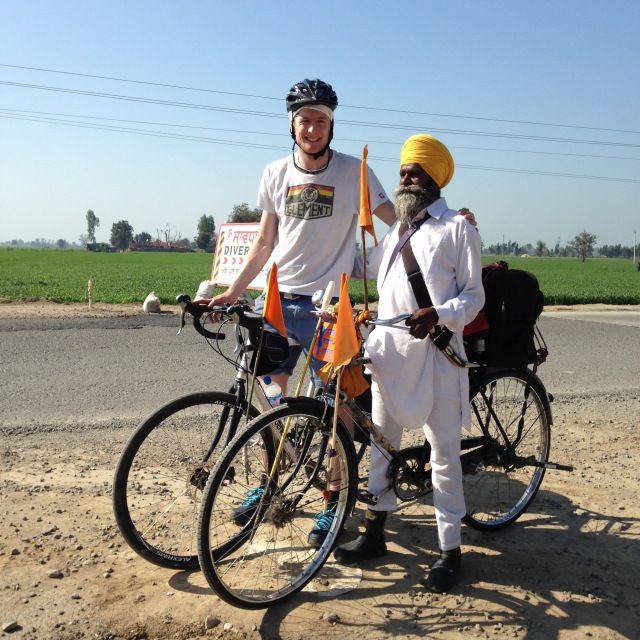 No time to eat, I hopped on his motorbike and we raced to Wagah, to catch the ceremony, which drew Uttam to liken himself to Guy Martin (see http://www.telegraph.co.uk/men/active/11377920/Guy-Martin-My-1000-mile-Indian-road-trip-on-a-Royal-Enfield.html). Arriving in the nick of time, we were ushered through the VIP lane (they’d quickly identified that I was ‘an English sir’) and we settled in for 45 minutes of pure farce. The crowd, going bonkers, were egged on by an exuberant MC, as the goosestepping/running/posing/turban-adjusting of the Indian border force was exactly replicated in full synchronicity by the Pakistani forces. I laughed, but also felt such ferocious nationalistic fervour might not help in the spiralling tensions between the countries. That said, it sure would spice up Buckingham Palace’s Changing of the Guard if they adopted a few sequences.

Arriving back in the village, a delicious chicken curry was washed down with some rather alarmingly large servings of rum in front of a grainy tv showing the India-Bangladesh highlights. What followed left me stunned. Following the cricket, they swapped channel to the WWE, and this elderly, portly Sikh man who had hosted me largely in silence erupted with cheers, naming each wrestler and each move. Wrestling is arguably the number one sport in Punjab, and after seeing how popular the theatrics of the Wagah ceremony were, I suppose WWE was a logical passion.

The following day, I had a big 150km cycle to Ludhiana, making good the lost day by bypassing Jalandhar altogether. Despite being chased by a rabid dog for 200m, I was in my element as I flew through the beautiful wheat fields of Punjab over the Sutlej river (one of the 5 rivers from which the state takes its name). People would pull up on motorbikes and chat for a while, all helping to whittle away at the KMs. With about 60km to go, I began to flag in the heat; stopping for some water at the next dhaba, I was amazed to be invited to join 2 Sikh teachers for lunch, for which they refused any payment. Sikh hospitality continues to amaze me.

It wasn’t until I actually arrived in Ludhiana that things started to get tricky. Turned away from countless hotels, I finally found one, only for my card to be declined. A short phone call later, an HSBC error had removed my travelling settings, meaning my pin had to be restored at a ‘local’ branch. HSBC may well claim to be the world’s local bank , but in this case a 90km cycle to the neighbouring city didn’t feel all that local. An inordinate amount of faff and Indian bureaucracy later, I got some cash through a Western Union (the bank of Mum and Dad has the best customer care, I generally find) and could think about heading on to Chandigarh. I had extended my stay by 36 hours, taking in all of Ludhiana’s slightly paltry attractions in one hour, and was bloody ready to go. 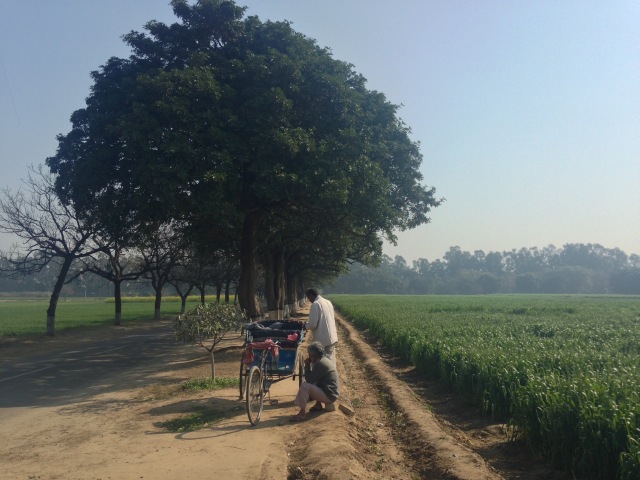 One last job remained before the 100km to Chandigarh. The pannier rack, a tragic victim of the sleeper train, needed fixing so I set off in search of a welder. I sincerely hope his welding is better than his English, though it must be said both skills were infinitely better than my Punjabi. 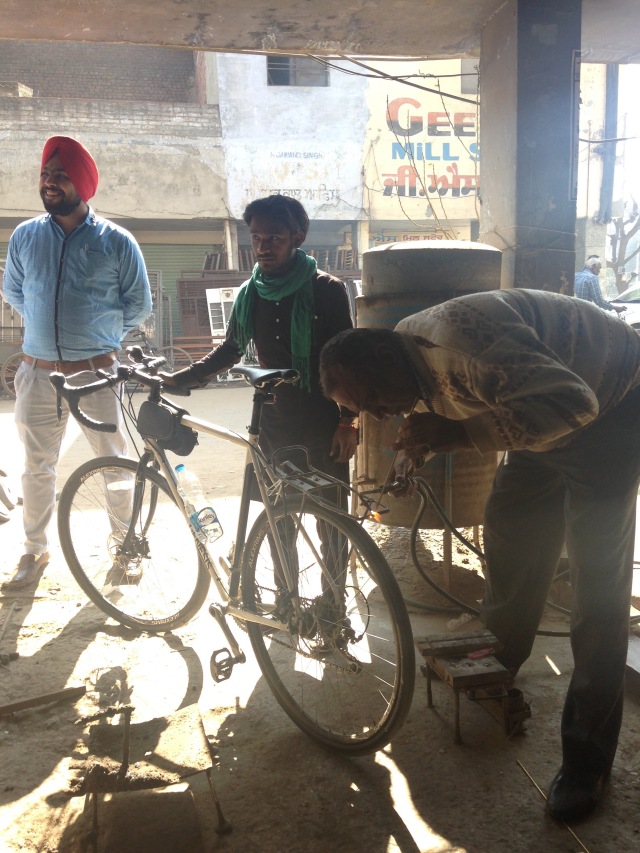 On the road to Chandigarh, I needed to set quite a pace if I was to make it before nightfall, and sure enough, fuelled by regular chai and samosa breaks, I made it in just over 4 hours, a good return on a hard cycle across Punjab. Undoubtedly one of the highlights was being stopped by the police (wait for it) and taking photos with them and journalists from what I believe was the Hindustan Times (I frequently asked what paper they were writing for, and this is all they said, although I fear it was the only paper they thought I would recognise). Certainly going to scour the pages over the next few days to see. Does it count as your 10 minutes of fame if you are completely unaware of which publication said fame occurs in? 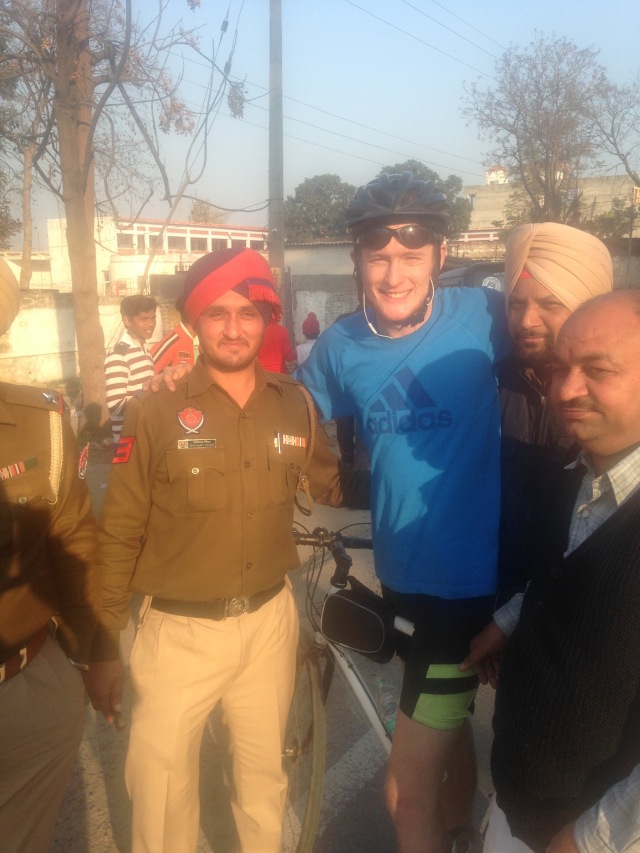 Chandigarh is quite a place. Interestingly described by an American backpacker to me as ‘the opposite of India’, I certainly know where he’s coming from. Designed by Le Corbusier under orders from Nehru, the first Prime Minister of Independent India, to build a modern city that reflected Nehruvian secularism, it certainly retains something of that futuristic feel, stuck simultaneously in the past as Nehru’s dream, and in the future, as the India that is yet to materialise, and surely never will. A day or two here will give more than enough pretentious waffle for the next blog, so I’ll spare you now!

PS: reading the paper this morning, I found out that the Indian blind team (two of whom attend the Institute of the Blind in Delhi which we’re raising money for) actually won the World Cup! Incredible news, and I can’t wait to meet some World Cup winners when I revisit the IoB in a couple of weeks.

Save A Child – More Info

To find out more about Save A Child and make a direct donation, please click here

Follow The Grand Trunk Road by bike on WordPress.com